Jonathan Juncal, Accegal main developer, has won with his Master Thesis, VirtualTec, the first prize at the 12th Contest of Technology Project, form A. These awards have been organized by Expourense and the Higher School of Computer Engineering of the University de Vigo.

Congratulations to Jonathan for his great work and this new prize awarded to his Master Thesis. 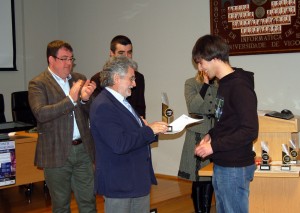 Jonathan Juncal has been awarded with the first accesit (2nd prize) at the Accessibility Master Thesis Award by Universia – Vodafone Foundations. His project VirtualTEC, was ACCEGAL starting point and their project leaders, Enrique Costa and Maria Fatima Garcia, were present during his defense and awards ceremony.
University of Vigo Journal report