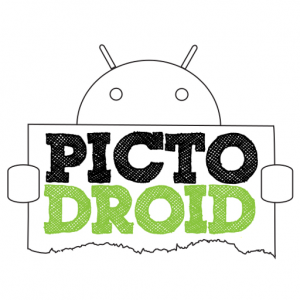 PictoDroid Lite is an application for Android devices that allows users to communicate through the use of pictograms or Picts (signs that represent schematically a symbol, a real object or a figure). This version allows to express different actions and create complex sentences. The selected sentences are created using Picts belonging to different categories. Once the sentece is finnished, the system will proceed to the reading of a sentence formed.

The application is currently in beta version and only in Spanish, to make it work you have to allow applications from unknown sources (Go to the menu “Settings”> “Applications”, then activate “Unknown sources”). To install, copy the file PictoDroid.apk to the SD card in your device, install a file browser (eg ASTRO), select the file PictoDroid.apk and the install option. If you have questions, want to report a fault or any other suggestions you can contact us at the email contacto@accegal.org.

The application allows the following options::

PictoDroid can be downloaded directly here:

The application uses the Picts of ARASAAC (http://arasaac.org/), created by Sergio Palao and distributed with Creative Commons license (BY-NC-SA).

The next video explains the use of the app (in Spanish).